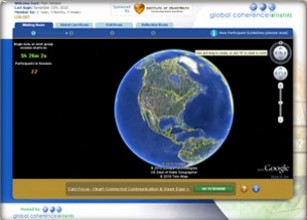 ‘What effect do human emotions have on the environment and beyond’? These and other questions are being put to the test in a bold, scientific experiment to measure the impact of both positive and negative thoughts and feelings on the earth’s magnetic grid.

Currently underway worldwide, the project has been initiated by the Institute of HeartMath LLC, a US based institution focused on bringing positive change to the world through cutting-edge technologies. In HeartMath’s words, “The Global Coherence Initiative is a science-based, co-creative project to unite people in heart-focused care and intention, to facilitate the shift in global consciousness from instability and discord to balance, cooperation and enduring peace”.

Described by Jack Canfield, best-selling author of the ‘Chicken Soup for the Soul’ Series and founder of the Transformational Leadership Council responsible for the project, as “perhaps the greatest experiment in the history of the world”, the Global Coherence Monitoring System (GCMS) is a network of sensitive magnetic field detectors strategically placed around the world to test the hypothesis that the earth is affected by mass human emotion. The sensors monitor fluctuations in the Earth’s geomagnetic fields and resonances in the ionosphere.

According to HeartMath “This system will enable a new level of scientific inquiry into the relationship between the earth’s magnetic field, collective human emotions and behaviours and planetary changes”.

It is planned for 14 sensor sites to be strategically place around the world. Three are already in place in California, Saudi Arabia and England with four more funded and soon to be functioning in Canada, New Zealand, Brazil and South Africa. The sensors are funded entirely by charitable donation.

Executive vice president of HeartMath, Howard Martin, will be a keynote speaker on an upcoming global online summit on ‘Emotional Intelligence’ (EQ), which will discuss this project and the soon-to-be-placed sensor in New Zealand. The Summit is the brainchild of creative visionary Kim Knight, Director of the Art of Health, nominated last year for New Zealand Woman of the year for her innovative work in health and science. The summit will feature 26 world experts in the field of human emotion.

Presenters will demonstrate through proven methodologies how developing and using EQ is essential for personal health, healthy relationships, business achievement, successful education and authentic wealth creation. Above and beyond this, they will also share how the use of EQ (as opposed to only IQ) is a pre-requisite for the positive development of the human race and earth, and how the future of the planet may even depend on it.

Luminaries such as Dr Bradley Nelson (US), Richard Moat PhD (NZ), Rob van Overbruggen (NL), Richard Flook (CAN) and Kim Knight (NZ) will be joining the summit to share their revolutionary findings on how emotions have been discovered to be at the core of many chronic illnesses. Many such illnesses have often been deemed ‘incurable’ in the prevailing medical paradigm, and presenters will share the dramatic and often instantaneous recoveries thousands of people have experienced using their ground-breaking methodologies.

Other well-respected EQ experts included Joshua Freedman (US), COO of 6 Seconds, who will covering the role of EQ in education, Dr Manjir Samanta-Laughton (UK), aka the ‘Punk Scientist’ best known for her revolutionary findings in the field of quantum physics, and Pat Armitstead, the world’s first joyologist. Other cutting-edge topics include Adriane Hartigan von Strauch’s (NZ) seminar on ‘Quantum Intimacy’, Brittany Watkins’ (US) seminar on overcoming emotional obesity and Patricia Evans’ seminar on emotional abuse. (See full line-up of speakers and topics below).

The online global event will kick off Mon 3 September (US) with Marvin Oka, co-author with Grant Soosalu of the ground-breaking new book ‘mBraining’ and the ‘mBIT’ multiple brain integration technique, who will share how the latest findings in neuro-science show we have three complex and functional brains and how we can harness and integrate these multiple brains for greater success, wisdom and happiness.

The Summit will run for 2 weeks from 3 September until 18 September, with several live and pre-recorded ‘virtual’ events. Listeners can tune in from anywhere in the world via the internet and phone in for the live events to interact with presenters. In order for the event to be accessible to as many people as possible, there are free listening options, although the goal of the paid option is to donate 10% of proceeds from premium ticket sales to the Global Coherence Initiative. It is the Art of Health’s aim to raise USD $10,000 for the project.

Richard Flook (CAN) Master Trainer and Originator of the META-Healing Process – Why am I sick? Emotional secrets behind healing

Detailed overview of presenter topics on the Emotional Intelligence Summit